There’s your common, every day creature and then there’s your creature created by Jerod Bogh. Oregon native Jerod Bogh was thrown head-first into creature creation with Hive-FX in Portland, Oregon as Lead Character Artist for shows such as the hit series Grimm. He has loads of talent, sculpting geometry on that Wacom tablet and is simply one of the nicest guys you’ll meet. We caught up with Jerod to find out what got him interested in CG and learn how KeyShot has completely changed his workflow. 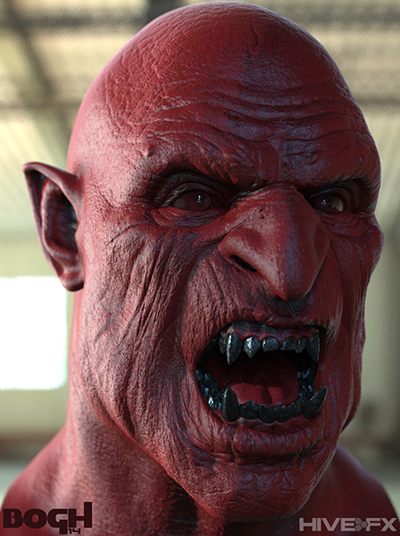 What first sparked the interest in art/cg?
I didn’t always know I wanted to be an artist, but I’d like to think I’ve always been one at heart.
Being drawn to 3D mediums I was the wood shop and pottery kid in high school. It was in that pottery class where I got my first taste of what it’s like to take a lump of clay and turn it into something useful or beautiful and unique with my just my hands and a few tools. While other students were making tea sets I was crafting horned Viking helms, textured and glazed to appear battle scarred and weathered with age. Growing up I was always in awe of most anything animated or science fiction. Pixar’s body of work and movies like Predator, Alien, The Thing, left their mark on me from an early age. Which must have been apparent to my Mom because a few years out of high school with no major direction in life, she helped push me towards going to the Art Institute of Seattle with a focus on Animation. At the time I had no real concept of how it was all done and thought that was what I really wanted to do. But it wasn’t long until I realized I didn’t want to animate half as bad as I wanted to design and model characters and creature. Once I found my stride being a modeler it let me fully embrace a direction for the first time. Which led to becoming a self taught ZBrush sculptor.

What are some highlights throughout your career?
My first gig right out of school was for the NBC series Grimm working at Hive-FX. It was a combination of pure luck and raw potential that got me in the door. At the time I had no idea I would be their only in house character artist for the next 3 seasons of the show. I was tossed right into the trenches and it was sink or swim immediately. In those 3 years I was able to hone my sculpting skills by sculpting actor’s digital double likenesses from onset photo reference. Then my task was to change them into some kind of monster or creature morph that our animators could use to transform the actor at will. This is where I learned about production art and how to work in a way so that many other artists down the line could pick up and run with anything I sent their direction. More recently I have been bitten by the 3D printing bug and was fortunate enough to work on a few projects with Nike through Caswell Sculptures.

What would you say is unique about your approach to a project?
When I was younger a bronze sculptor told me that “you are only as good as your reference.” This stuck with me and to this day the first step to any project of mine is a large dose of reference hunting. I enjoy the hunt for images that will help or guide the process. I also have a ton of inspirational images I’ve saved from other artists over the years but during the early stages of a project I try to stay away from them. Relying mainly on nature and animal reference images.

What is your primary 3d modeling software?
Pixologic’s ZBrush is my primary modeling package without a doubt. With ZBrush, I quickly found the confines of traditional poly modeling disappearing and the ideas flow freely with digital clay. Happy accidents can be embraced and Zbrush allows me to focus on the large shapes all the way down to pore-level details. 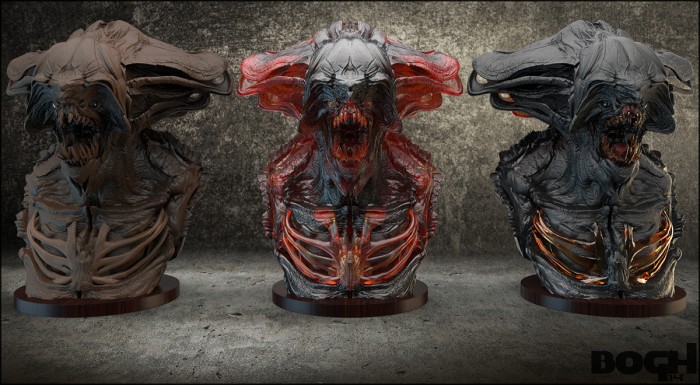 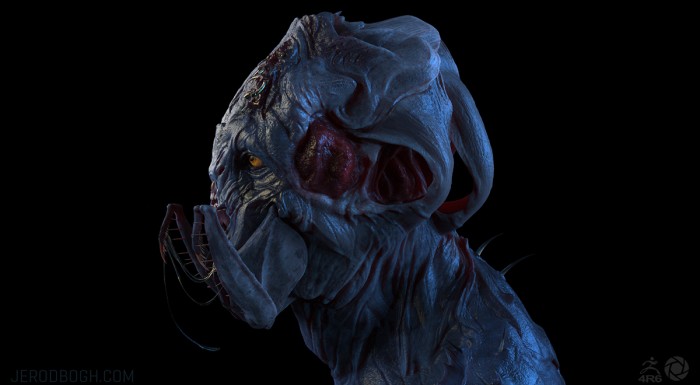 Where in the process do you use KeyShot?
KeyShot has been an incredible addition to my workflow. From the early concept stage all the way to final beauty renders, KeyShot has easily become my go to rendering powerhouse. I find myself more and more jumping into KeyShot early on with a rough sculpt or design. It’s here where I can test a plethora of lighting conditions and find camera positions I like to better showcase the model. Helping me to verify what’s working with a design and what needs more attention. With these early render tests I’m finding they greatly impact my overall flow and finish. I feel that ZBrush and KeyShot really begin to fuel each other. I get excited to take a sculpt into KeyShot, which in turn gets me excited to get back into ZBrush and push it further with what I’ve learned.

KeyShot works at the speed of my imagination. I don’t have to wait around for a 10 minute render to finish only to realize something isn’t working or that I forgot to click a check box somewhere.”

What makes KeyShot an important tool to have?
KeyShot honestly made me fall in love with lighting and rendering for the first time. Before KeyShot I just couldn’t get myself to gear down for hours of render tests. That has all changed. The instant gratification I get with KeyShot’s real-time render window is like an addiction now and I often find myself making happy accidents that simply would have never happened in another rendering package.

KeyShot works at the speed of my imagination. I don’t have to wait around for a 10 minute render to finish only to realize something isn’t working or that I forgot to click a check box somewhere. I tend to just jump in and throw heaps of lighting environments and materials onto my model to find something that works. The drag and drop nature of KeyShot makes it so easy to explore options and find those happy accidents.

When working with clients I can share early development renders that look real from the beginning. Helping newer clients feel confident in a given art direction or mood. After approvals I will use the early test scene as a launching pad for final beauty shots.

KeyShotVR renders are one of the single most powerful tools I have added to my repertoire. They release 3D artists from the confines of single images. With KeyShotVR I can render an image at 10 degree intervals around the model. When it’s done I get an extremely high quality turntable that is interactive and browser-based with no added plugins or extra software required! Sending a VR turntable of a model to a client completely eclipses what one-off images can do and they look incredible when added to a 3D portfolio.

What advice would you give to someone interested in doing what you do?
I would tell them that they need to live, eat, and breath this stuff everyday! The level of competition is ever growing and I’m constantly in awe of the work others are putting out there. I think the trick is to not let the sheer amount of awesome art get you down or stifle your dreams. You’ve got to become good at converting others success into fuel for your own fire. Immediate success is few and far between so learn to embrace the failures, because you will have a lot of them. It’s those failures that will allow you to measure your progress and shape a new direction.

Jerod Bogh on KeyShot 5
With KeyShot 5, I’m finding the Pattern Tool (Instancing) to be extremely beneficial. While the concept of instancing isn’t a new one, I feel like the team at Luxion has uncovered some new form of black magic with their interpretation. I found that I could take a model with over 37 Million points and instance it around the scene as many times as I wanted with absolutely no file size repercussions in sight! But it was my next test that left my jaw on the floor. That was getting 401 instances to all fit onto a long table. Which made that scene weigh in somewhere around 14.8 Billion points. 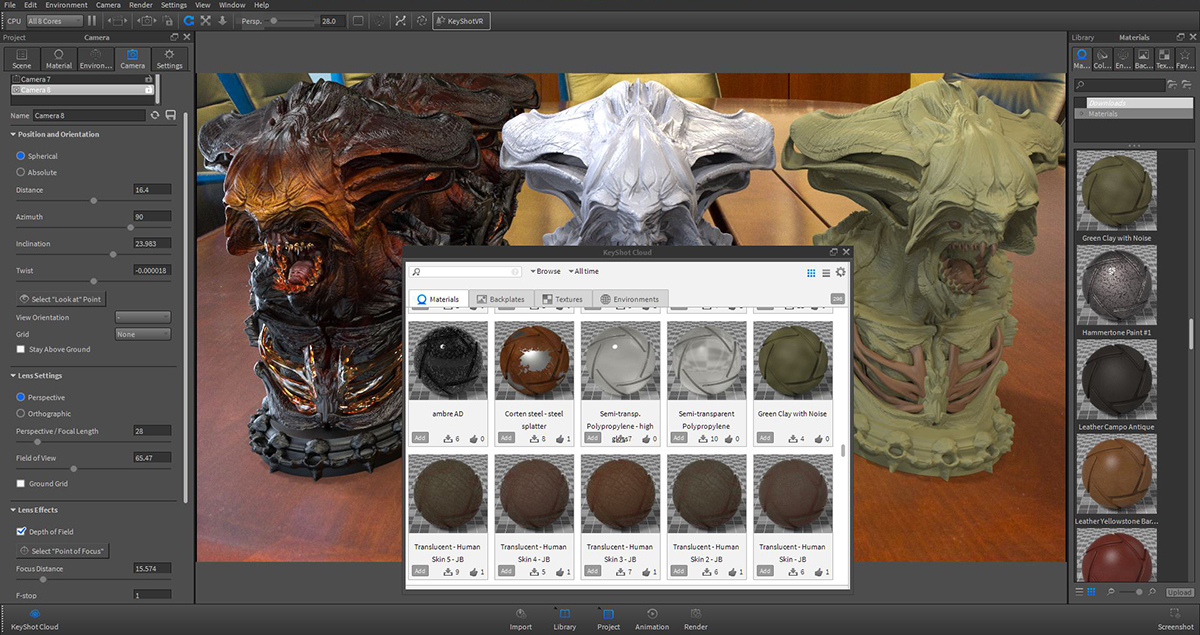