Irvine, California, and Cambridge, Massachusetts – June 13th, 2013 – Luxion, makers of KeyShot® and the leading developer of advanced rendering and lighting technology, and GrabCAD, the largest online community and collaboration platform for designers and engineers, today announced the partnership between the two companies that connects KeyShot and GrabCAD to allow the seamless transfer of data between the two platforms.

With KeyShot, GrabCAD users have the ability to quickly create photorealistic 3D renderings, animations and interactive visuals to compliment the 3D files they share in the Community or the private projects they collaborate on with GrabCAD Workbench. This is extended even further by the wide variety of 3D file formats that both KeyShot and GrabCAD support, with tight integration to import, view and render 3D data. This partnership establishes the additional ability for users to connect to their GrabCAD account from KeyShot to publish 3D renderings of their models, saving time and improving the efficiency for GrabCAD members. 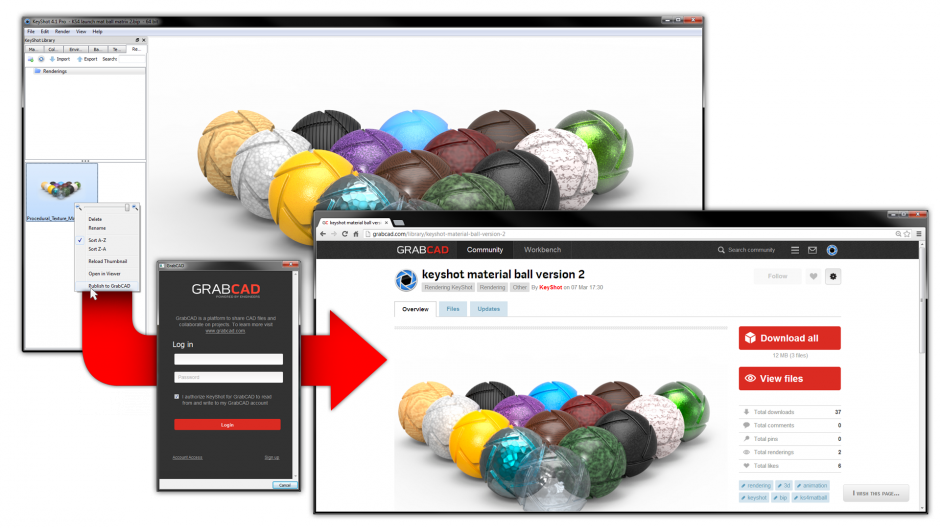 How it works
Within KeyShot, a new option under Edit, Preferences, Plugins is now available. When a user activates this plugin, they will be prompted to log into GrabCAD allowing authorization to connect to the GrabCAD users’ account.  After a rendering is created, the user may select the image(s) they wish to upload from the KeyShot Library Renderings tab, right-click and select Publish to GrabCAD. The user has the option to publish the image(s) to the public Library or private Workbench. Once published, the user will be taken to the GrabCAD project in their web browser. Initially, this functionality allows direct publishing of a rendered image to a GrabCAD Project or Workbench, with the ability to import models directly into KeyShot coming later in 2013. A video of the functionality can be viewed here.

“We are very pleased to take our involvement with Luxion to the next level with this partnership”, said Rob Stevens, GrabCAD VP Sales & Marketing “KeyShot is the most popular software in the GrabCAD community for creating photorealistic images. This integration makes publishing 3D rendered images even easier for GrabCAD engineers and designers to show off their great work.”

“GrabCAD is the key place for engineers to find content and collaborate with partners.” Thomas Teger, Vice President of Products and Strategy at Luxion.  “Allowing KeyShot users to quickly move projects to both the public Library and private Workbench projects will make it even easier for them to integrate high quality renderings in their work.”

Pricing & Availability
This integration will be available shortly within KeyShot 4.1 at no charge. Users on subscription can update to KeyShot 4.1 free of charge with full licenses able to be purchased at www.keyshot.com, along with Luxion’s patent-pending add-on applications, KeyShot Animation and KeyShotVR.

About GrabCAD
GrabCAD is leading the Open Engineering movement, helping engineers get products to market faster by connecting people, content and technology. GrabCAD Workbench makes it easy for engineers to share files, work with partners and complete projects on time, while the GrabCAD Community accelerates the design process by tapping into the knowledge and resources of the largest source of CAD content and engineering minds in the world. Founded in 2010, the company is backed by Matrix Partners and Charles River Ventures and is headquartered in Cambridge, MA with a development offices in Estonia and the UK.