You know those images and movie scenes that make you go, “BWAAAAA. WHOAAAA!!” Well, those images, in the end, take a lot of people to put together. But the idea starts with a few, and most often, with one artist. One of these artists is Emmy nominated Chris Rosewarne, the British Concept Artist with credits in Solomon Kane, Max Payne, Skyfall, Guardians of the Galaxy, Star Wars and many, many more. A background in Prop Making and Matte Painting set the stage for what he creates today, and with a few tools at his disposal creates some of the most stunning concept imagery you’ll see. Chris filled us in on what got him into the film industry, how he came to use KeyShot and provides an incredible bit of advice for others interested in breaking into the film industry themselves. 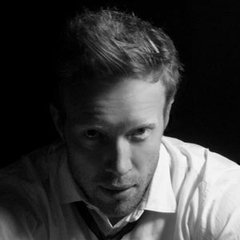 I loved films when I was younger. I was always drawing. I’d buy magazines that showed behind the scene photos and comic book movie tie-ins just so I could look at the visuals and copy them. I loved films like Aliens, Predator, and the Terminator because of the props, vehicles and creature designs, I drew that stuff all the time as a teen, but I never knew it was someone’s job to sit there and do it on a film, I don’t even think I knew the term “concept artist.” There were certainly no books or magazines, courses or DVD’s on the subject like there are today. This was all pretty much pre-internet, so I was buying all the “Art Of” books to get what I could and it was this passion for films that led me to study model-making at the Arts Institute Bournemouth. If I couldn’t draw it, I was going to build it! I got into the UK film industry as a prop maker where I worked for a couple years on projects like Terry Gilliam’s “The Brothers Grim,” “Reign Of Fire” and “The Hitchhickers Guide To The Galaxy,” building everything in the workshop from period props to sci-fi weaponry. It was going well until I bought “The Art Of Star Wars – Attack Of The Clones” and the work just stopped me dead! The drawings just blew me away and I pretty much quit my job, bought a Wacom tablet and a set of warm grey markers to start working on a portfolio that I could take round the art departments. I was hooked! 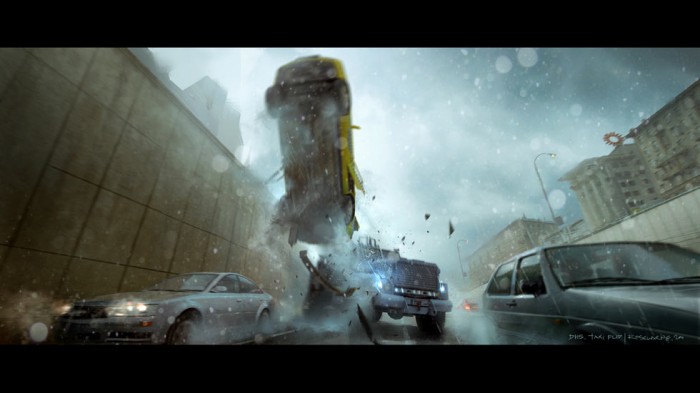 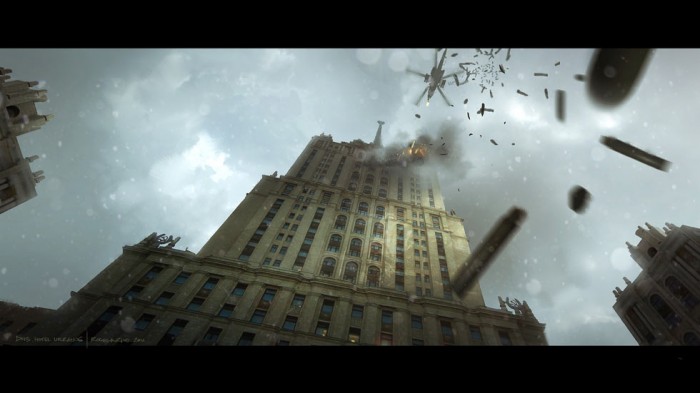 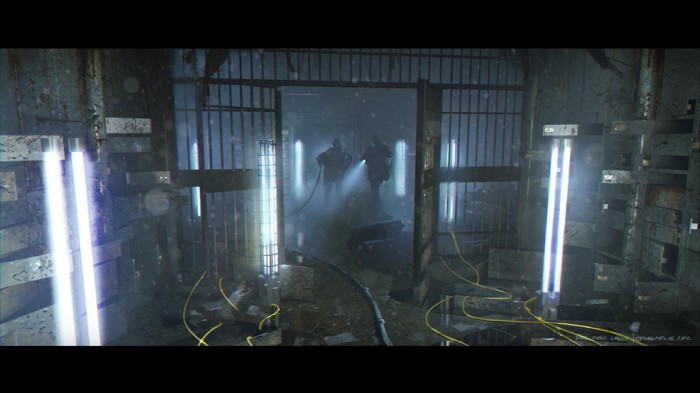 Some of Chris’ early Photoshop work for “A Good Day to Die Hard.”

I’ve had the pleasure of working on some amazing projects with some very talented artists–meeting the guys that I heard about and had tried to copy when I was starting out as a concept artist. There was a moment when I was working on “Red Tails,” a movie by Lucasfilm about the first Tuskegee airmen fighting in WWII. I had all my work up on the wall and George Lucas’ producer, Rick McCallum said, “Hey, these are great, can you draw sci-fi?” He hooked me up with the art department on the ranch and I began working on the Star Wars TV series they were developing at the time. It was a real moment of feeling like I had made it, from buying the Star Wars book to submitting work for it a couple years later. I think now, the main highlights for me are being able to take a design from pen and paper stage, be involved in the workshop build and then see it on the screen. It’s a real payoff and extremely rewarding. One example is the concealed sniper rifle in the Bond movie Skyfall but more recently, Quill’s pistol in Marvel’s “Guardians Of The Galaxy.” I’m seeing Marvel fans build their own model versions and Hasbro has even made a Nurf gun out of it for the film, it’s amazing seeing how your work gets carried out into the world. I’d say my prop-making past gives me a great advantage in my work as a concept artist, as I know how to build what I design–something prop masters are always thankful for. I find that part of my mind is always in the workshop, seeing things turned on the lathe, machined on the mill or cast from some nice resin. I love to go down to the worships and dig around and talk to the technicians. It’s an endless source of inspiration, plus the equipment they have down there is very cool. You never know where future design ideas will come from.

My primary modeling software is SketchUp, I never really saw myself as a “3D guy,” but SketchUp is great for quickly generating simple geometry which I then paint over in Photoshop. It’s used a lot in the art departments too, as it’s a great architectural tool and fast to build in. 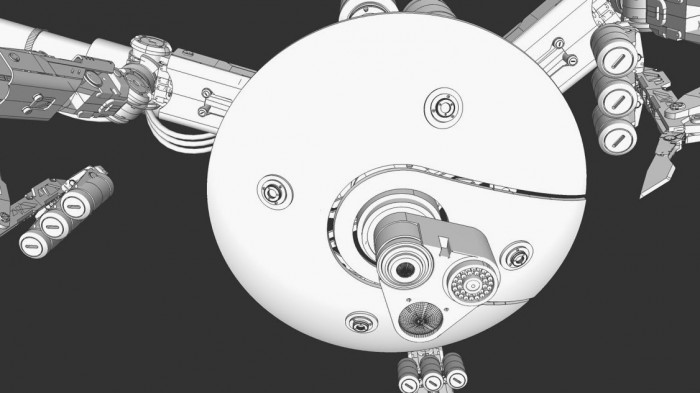 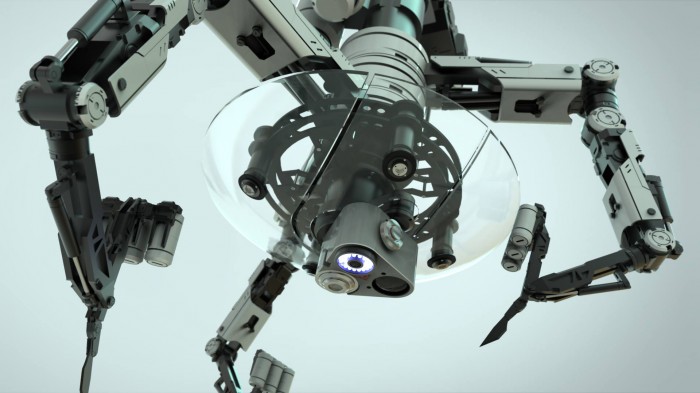 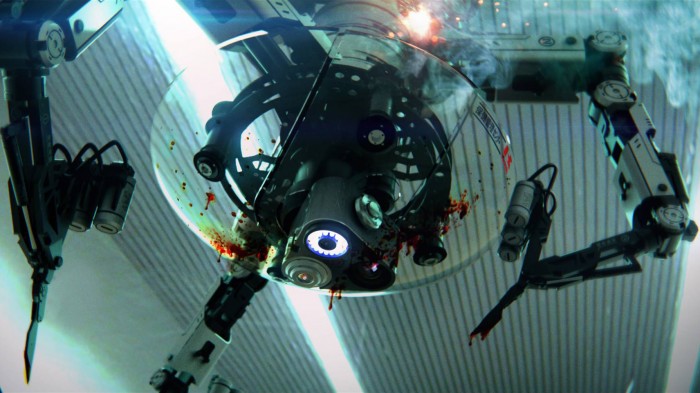 Through the process, from SketchUp to KeyShot to post in Photoshop. 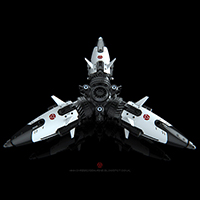 I’m very new to KeyShot, I was actually using another Sketchup renderer, but creating a successful render was like alchemy–there was no preview and sometimes you’d run a render overnight only to find the next morning that the whole visual was black, because the camera was too close to a wall! I was blown away by what KeyShot could do to my models, that it was real-time–I could see what I was doing! I typically finish the build in SketchUp and bring it into KeyShot to create a presentation visual and experiment with materials and camera angles. I usually have to to give my models some sort of visual context so the ability to use a backplate in the program is great. It’s very easy to match the lighting, so when I jump into Photoshop a lot of the work is already done and I’m free to work up the concept or take it to matte painting level.

KeyShot leaves you free to concentrate on the most important thing – the design of your model. You don’t have to worry about conveying the look and feel of certain materials or lighting situations because that part is taken care of with such speed and ease…”

KeyShot leaves you free to concentrate on the most important thing – the design of your model. You don’t have to worry about conveying the look and feel of certain materials or lighting situations because that part is taken care of with such speed and ease, with the tight deadlines you work with in the film industry its a life saver! I’d actually go one more and say that for me it’s an incredibly seductive stage in the design process, it makes you want to push your modeling further, tighter, more detail because KeyShot shows it off all that extra work beautifully. It’s been a game changer for me, and the best reaction is that people are shocked that the model was made in SketchUp.

My advice for someone looking to get into concept art? One route would be to get yourself into art college Study something like industrial design or illustration. I believe there are even “concept art” degree courses now (in the UK at least). That way you’ve been at it for three years and, by the time you graduate, you’re usually equipped with 3D modeling and Photoshop skills. You’ve been taught the basic foundations in essentials, like perspective, drawing, composition and proportions. It’s then a question of tailoring your portfolio to suit a film art department. Have a look at other concept artists websites. You’ll see there’s a lot of environment work and prop/vehicle design there. It depends on the genre of the movie you’re working on, but make sure it’s not all sci-fi ships in your folio.

Have a look at some medieval topics–there are loads online, in books and, even better, get to a museum and see it first hand. Research interesting things like medieval scissors–they’re incredibly ornate and beautiful to look at. Period items and designs like this help balance out the portfolio. You’ll need to show you can be diverse in your designs, as your task may be laser pistols on one project then vintage walking canes on the next.

Compared to when I was starting out, there are so many resources available to a budding concept artist now. There are loads of concept painting and modeling tutorials on the web and Youtube. Not to mention books, magazine and actual training DVD’s.

So put a portfolio together and start sending out your work. Generate an online presence by posting to forums and concept art communities. Look up games studios and film production houses. Be polite, persistent and if you’ve got some talent to show, you’ll get the work.

Probably my best bit of advice to anyone starting out is to be aware that you are playing a “long game.” In the film industry especially, it takes time to build contacts, networks, and clients to keep you gainfully employed. If you’re not working for a client then make sure you are working on your folio with new personal work that you can show, then get it online. Always be working on something to keep you in the zone and fresh. Film industry concept work-hours are long with very short deadlines, but at the same time, it’s incredibly rewarding and I’m thankful every day to be doing what I do. After all, who doesn’t want to draw guns, robots, and spaceships for a living? 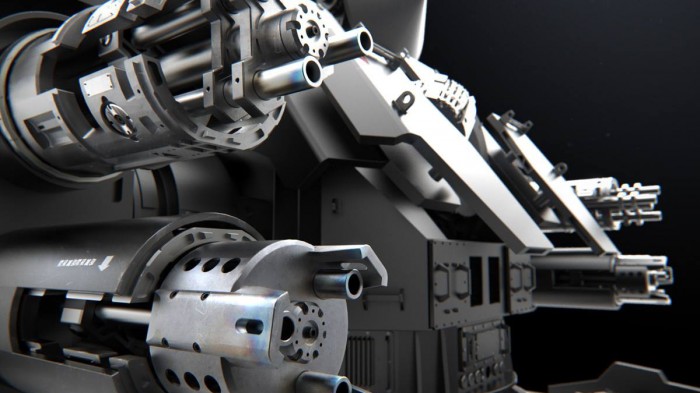 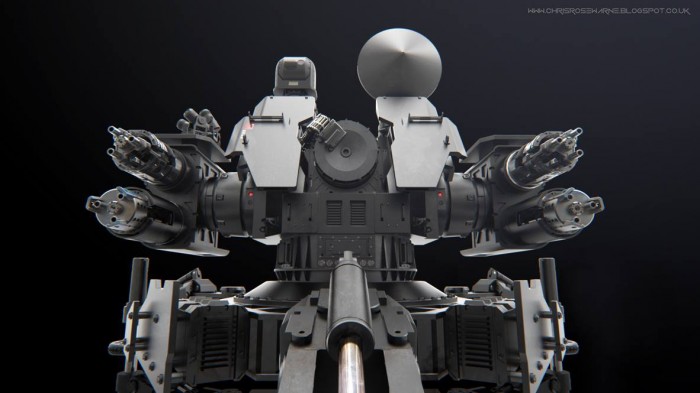 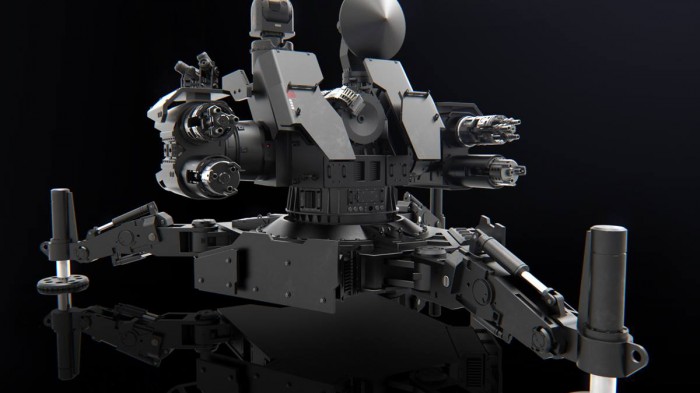 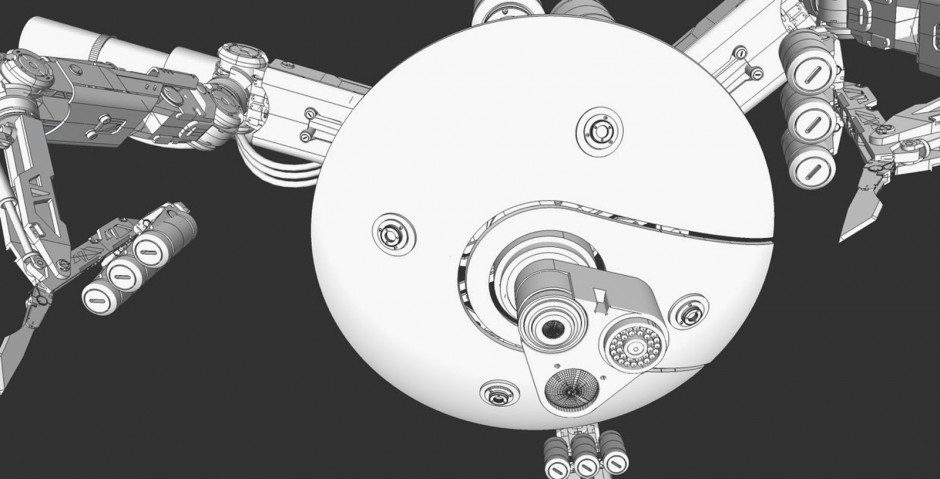 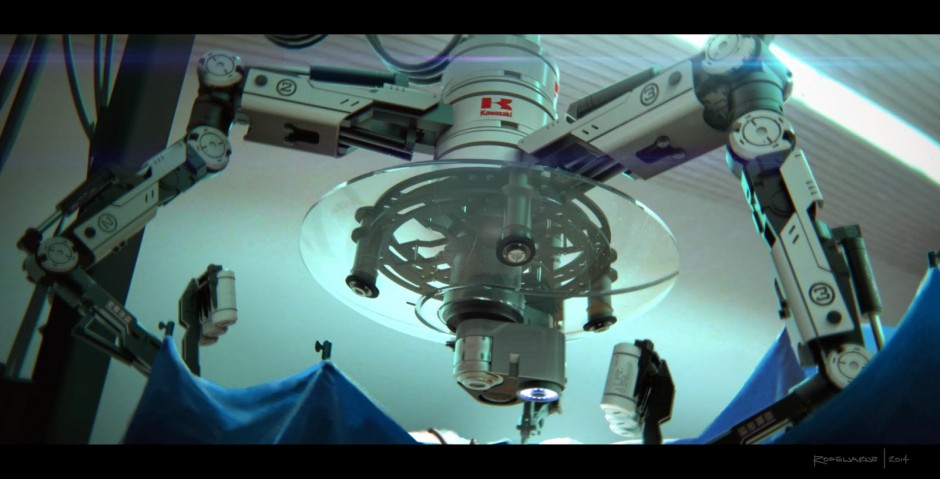 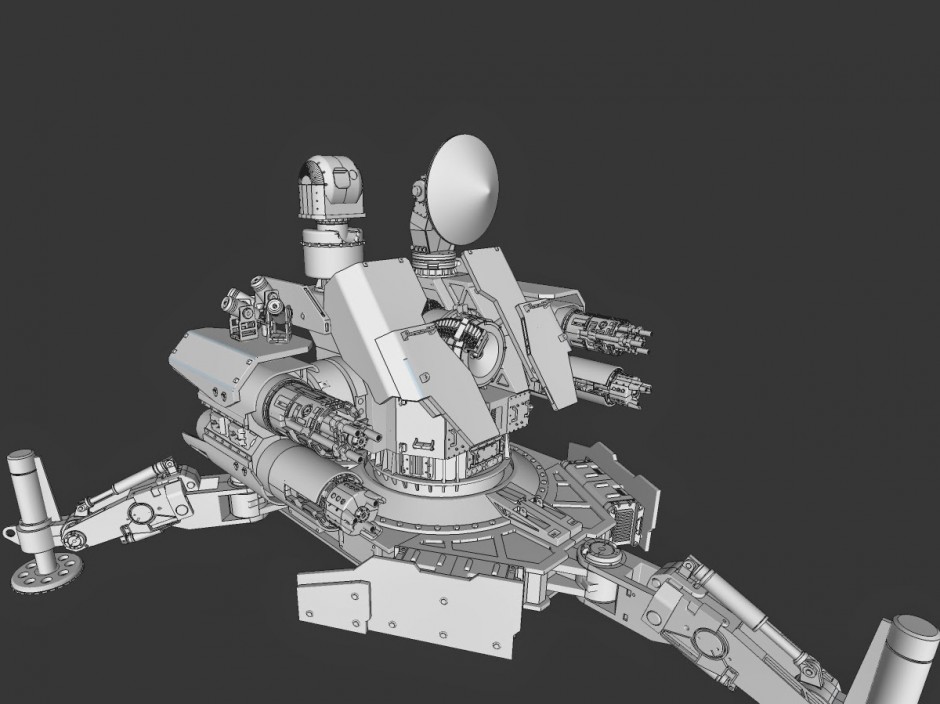 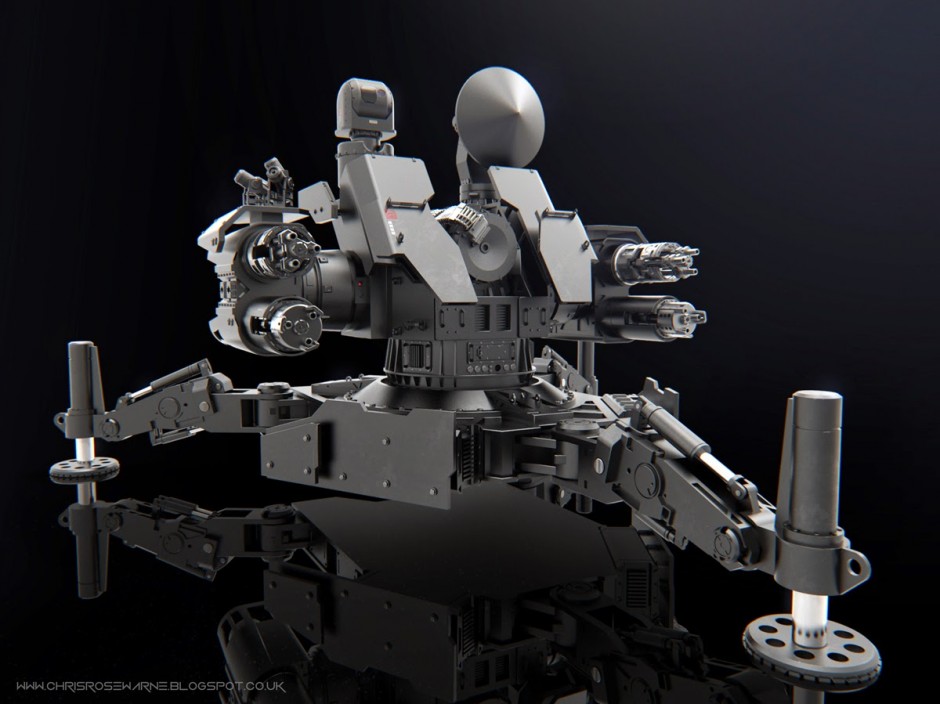 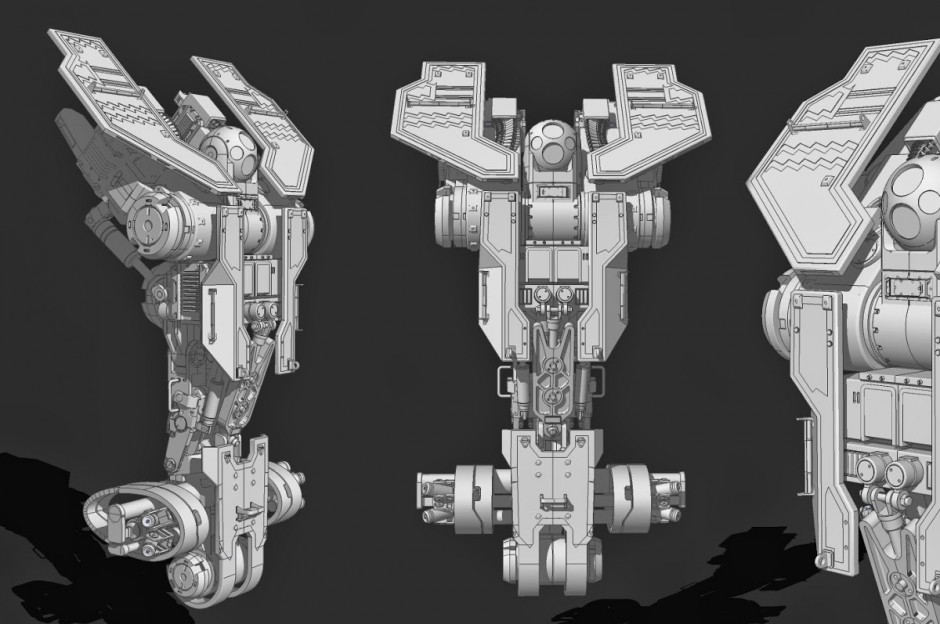 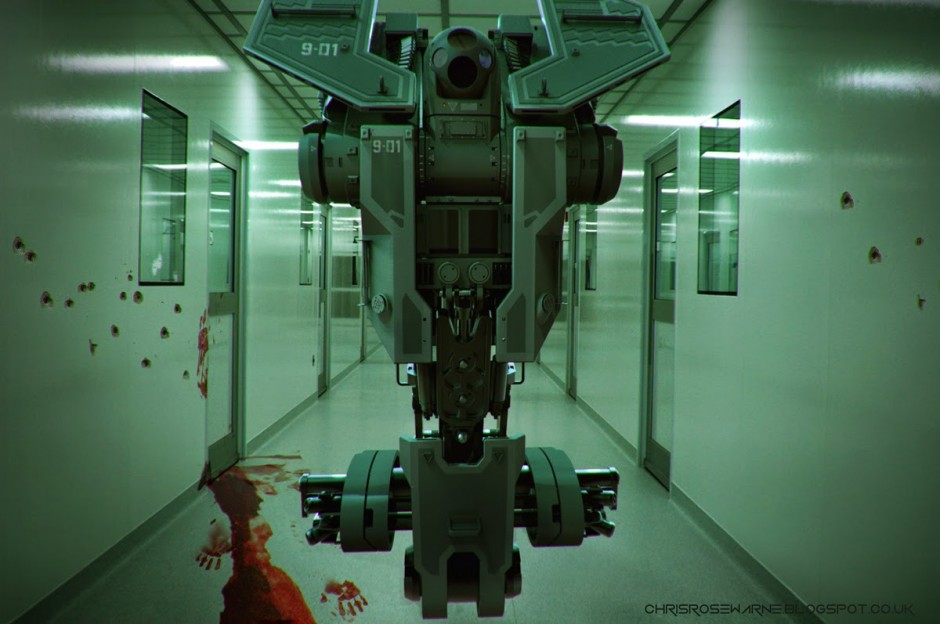